Proud supporter and board member, Frank Okam checks in with kidsadvantage.org to give us a glimpse of what he has been up to.

Frank Okam of the Accumulative Advantage Foundation most recently retired from the NFL where he finished a successful six year career. As a highly recruited prospect out of high school, his success continued into the college where Frank started all 4 years at the Univ. of Texas.  The dominate defender once known as the “Nigerian Nightmare” has seen his share of life’s ups and downs and is excited to share part of his story with us. Frank is an awesome example of what one person can do when presented with the right opportunities and platforms,  sports provide. Frank has been a proud supporter of the foundation for more than five years strong even in Killeen, TX where he has absolutely no ties to. Frank is one of the most fascinating athletes I ever played football with because of his mindset. 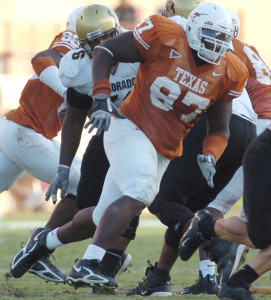 His canny ability to find the silver lining in any situation makes him shine from the crowd and I believe is the factor that will allow him to have such a long career in football.  Frank is one of the smartest people I know and most importantly, a genuine person. Frank opens up to share the other side of organized sports we all face, at some point, through our journey of life.  As young athletes we think sports will last forever,  in reality we all come to a point in life where we have to change courses, which as Frank explains, is not easy. I am proud to watch Frank and his journey through life.

“Hey guys Frank Okam here. I have been very busy lately most recently serving as a defensive graduate assistant to Rice University. This past week I was hired to be the defensive line coach at Rice.  Additionally, I am finishing my Masters in Liberal Studies and most recently presented my capstone thesis on “How coaches affect the social structure of their team and decision making of athletes”.

The reason I got into coaching was simple. I love football and what it means in comparison to life and I love the impact you can have on future generations. Coaching is a life of service that forces you to embrace all cultures and while instilling individuals with values like dedication, self worth, and creating that intrinsic movement to perform at a high level regardless of what you are doing. The mission of coaching, just like parenting is to create a better version of yourself.

One of the toughest things I had to deal with as an adult was the concept of failure. I was an all American in high school and college and I got cut from the NFL four times. As a competitor that did a number on my psyche and after I decided to stop playing it took me a while to recreate my identity. What I’ve learned now is that failure is not real. Everyday we get an opportunity to expand our consciousness and learn more about ourselves and the world around us. So in every “failure” there is a lesson, to improve yourself and others around you if you listen closely and look soberly.”